At a concert Cindy and I did in Washington, DC, our friend Ted Miller asked me if I had any interest in writing a song about unicorns. I admitted I had no knowledge of the topic, but was curious to know if he had some special perspective that might be worthy of a song.

I hadn't realized that Ted was a consultant and researcher for several congressional committees, and taking the challenge, he soon presented me with a thick stack of information about the legendary animal. It made for very good reading. And much of it turned out to be pretty singable, once we had arrived at the right storyteller's tone. It's not 'once-upon-a-time,' it's a little darker and more foreboding. But hopefully engaging.

In European folklore, the unicorn was commonly described as an extremely wild woodland creature, a symbol of purity and grace, which could be captured only by a virgin. It is often used as a symbol of fantasy or rarity. But also, it seems even from the earliest times, to be a symbol of what is lost when a species has become extinct. With extinction, we may not know what is lost, and that's a central message of this song, even though it's presented in a fantasy or fairy tale form.

Jean-Louis Chrétien, in his book The Unforgettable and the Unhoped for, wrote about the Greek concept of double-forgetting. Stated simply, maybe too simply, it's that we may have forgotten some important fact or skill, but also that we have forgotten that we have forgotten it. For me the unicorn stands in for all that is lost with extinct species, many of whose identities we will never know.

What would a unicorn have to teach us? In our song, we take the voice of the unicorn as a warning, but also a challenge to the young woman to answer her own conscience and do the right thing. Something that may require that she go against her elders and even her society.

The horn itself and the substance it was made of was called alicorn, and it was believed that the horn holds magical and medicinal properties. The Danish physician Ole Worm determined in 1638 that the alleged alicorns were the tusks of narwhals. It's common for the male narwhal to grow a single long tusk, which is in fact a canine tooth that projects from the left side of the upper jaw, through the lip, and forms a left-handed helix spiral. Only fifteen percent of female narwhals produce a tusk.

False alicorn powder, made from narwhal tusks or horns of various animals, were sold in Europe as medicine as late as 1741. The alicorn was thought to cure many diseases and have the ability to detect poisons, and many physicians would make 'cures' and sell them. Cups were made from alicorn for kings and given as gifts. These were usually made of ivory or walrus ivory.

In one of his notebooks Leonardo da Vinci wrote: “The unicorn, through its intemperance and not knowing how to control itself, for the love it bears to fair maidens forgets its ferocity and wildness; and laying aside all fear it will go up to a seated damsel and go to sleep in her lap, and thus the hunters take it.”

In heraldry the unicorn is best known as a symbol of Scotland: the unicorn was believed to be the natural enemy of the lion - a symbol that the English royals adopted around a hundred years before. The Scots chose the unicorn because it was seen as a proud and haughty beast which would rather die than be captured, just as Scots would fight to remain sovereign and unconquered.

There is also the hint that the unicorn could defend itself against all beasts including the lion. Edmund Spenser's The Faerie Queene from 1590 describes a bitter rivalry between the animals, though they would later appear together on the royal coat of arms of the United Kingdom.

The earliest description in Greek literature of a single-horned animal, 'monokerōs' in Greek and 'unicornis' in Latin, was by the historian Ctesias (c. 400 BCE), who reported that the Indian wild ass was the size of a horse, with a white body, purple head, and blue eyes, and on its forehead was a cubit-long horn colored red at the pointed tip, black in the middle, and white at the base. Those who drank from its horn were thought to be protected from stomach trouble, epilepsy, and poison. It was very fleet of foot and difficult to capture.

In 1998, Cindy and I got to visit the Musée de Cluny in Paris. There we saw the famous tapestries known as The Lady and the Unicorn, said to be “a national treasure of France.” Six very large individual pieces are there, made around the year 1500 for a noble family with close ties to the French monarchy, the Le Viste. This is clear from the heraldic symbols shown in the tapestries themselves.

The tapestries were most likely designed by the “Master of Anne of Brittany” (so called because he designed a book of hours for the French queen, Anne of Brittany), a preeminent artist of the day. Tapestries of such quality are rare, and few examples survive. They were probably woven in the Southern Netherlands, not France, for the standard of weaving was higher there.

From the official description: “Materially, they are breathtaking. Their elaborate millefleur (thousand flowers) backgrounds form hypnotic patterns. The sumptuous stuff from which they are woven – wool and silk, dyed with rich, natural dyes – insulate the beholder (literally part of their original function.) They muffle sound, creating an atmosphere of quiet mediation. The air is stilled, and light is enriched by their surfaces, generating a transcendental aura that draws the beholder into their complex internal universe.”

Much more about the The Lady and the Unicorn tapestry cycle and the interpretation of their symbols and can be found here.

Here is a video I've made of our song using some of the tapestry images:

Recording of "The Unicorn" from the CD The Light of the Day. Video by Steve.

"The Unicorn" is available on our CD, The Light of the Day, which can be purchased here.

Here are the lyrics: 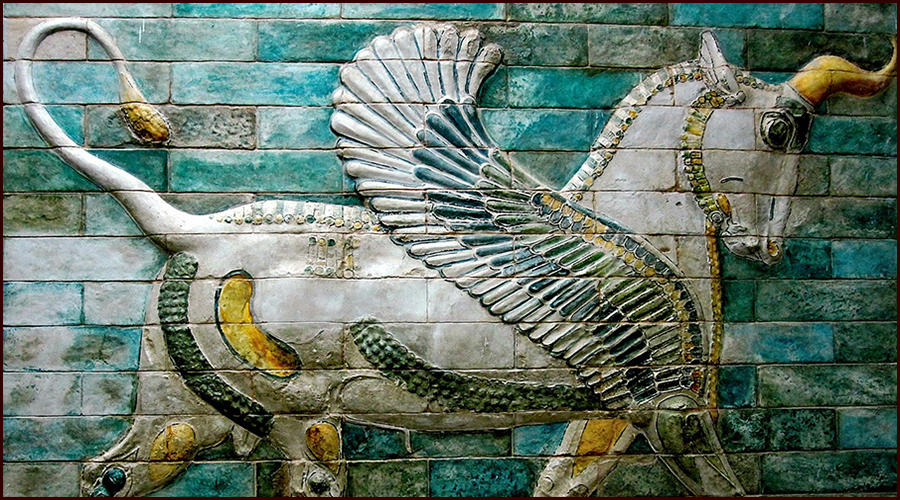 Unicorn in the Apadana, at Persepolis in modern-day Iran